Disney and the war: Service With Character 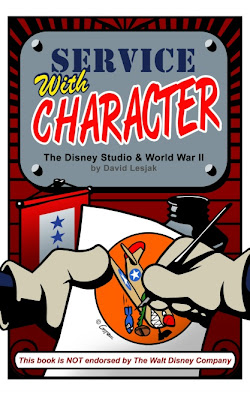 My book on Disney's involvement in World War II is now available in both print and e-book formats on Amazon. It's a revised edition of the book Toons At War, which I self-published 13 years ago! The title of the updated and revised edition is: Service With Character. The Disney Studio and World War II.

The second edition contains a lot of new information on Disney's contributions to the home front, military training films, propaganda films, life at the studio during the war, and the Studio's creation of over 1,200 combat insignia. This book covers a huge variety of topics related to Disney during World War II.

Click on this link to check it out.
Posted by DisneyDave at 7:31 AM

Is the paper version still available? I don't have an e-reader, do have an android tablet, I should look and see if it'd work for that!
Thanks for keeping up this blog, it's so interesting and I'm always looking forward to seeing more art by Hank Porter. His art is very inspiring and I wish his name was better known among Disney/cartoon fans.

Thanks for the comments. Unfortunately I do not think the revised edition will be printed in paper form. There is just so much more time and cost involved and both are in short supply. The original book sold out years ago and I never see any come up for resale. Plus the revised, second edition is so much better with almost double the photos (many, many more in color), and lots of new info. I am now working on completing Hank Porter's biography. I hope to have that book completed in about a month's time but again, probably as just an e-book as well. Amazon does offer free apps for a variety of electronic devices. You can even get a free Kindle app for your home computer, as well as many of the i-devices and android devices too. Thanks very much for your interest!

Would second the request for a print version. This is really the type of book one wants to pick up and thumb through quite often.
But I do understand the logistics and cost of print these days...